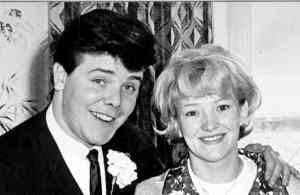 Today, we’re celebrating our fifty-fourth wedding anniversary and we are the ones who are most surprised we made it. No, not because we don’t get along, have huge rows, or hate each other’s guts. Our surprise and elation stems from the fact we both prepared for my husband’s death in 1989. For that year and many years later, in fact right up to now, we’ve expected his health to separate us, so making it this far seems like a huge miracle to us.

My husband was just forty-three when our lives changed forever. One otherwise normal working day, after a short coffee break at home, my husband made himself comfortable in his car ready to continue his day’s work as a private hire taxi driver. As he started the engine, he suffered severe chest pains. Although in agony, he managed to stumble back into the house and phone our GP for help.

We were pretty green then about health matters and didn’t realize what he should have done was phone the emergency number 999 and ask for an ambulance. When he told the receptionist he thought he was having a heart attack, she offered to make him an appointment for three days later. He insisted he needed to see someone immediately but she said she couldn’t fit him in. This was in 1989 when the difficulties with making appointments were not as bad as they are today. I dread to think what happens in emergencies today.

By the time he’d finished speaking to the receptionist and had slammed the phone down in disgust, his pains were subsiding. He knew he’d suffered some major trauma though, so he went to the A&E unit at our nearest hospital. Although the doctors there told him he had to give up work, they never confirmed at that time he’d had a heart attack. They didn’t give him any of the usual procedures which would have shown the condition of his arteries and whether or not he’d suffered a heart attack. Although he regularly saw a hospital consultant, his doctor’s notes then, and for several years afterward, always said hypertension.

This was a really difficult time for us. Unable to even walk up our path to the car, a distance of 25 feet,  my husband was becoming frustrated and demoralized. Another major problem for us was financial.

My husband had always been the earner. Now we had no income apart from the small contribution made by our eldest son.  It was six weeks before we actually received a small allowance from the state although they did refund the back payments later. Every service we’d been paying for at that time, we cancelled. We no longer had newspapers delivered, a window cleaner, nor insurances. We just concentrated on all the things we had to pay, like the mortgage, and utilities. Luckily, the car was covered under the insurance, so we didn’t have to pay for that. Economy lessons learned at that time still guide our lives now.

Knowing your much-loved partner is seriously ill and could be taken at any moment changes you. I gave up on the career dreams I’d been planning for myself, at least while he was still here. Married in 1965, I’d been a stay-at-home mum until 1985 when, at the age of forty, I returned to college intending to further educate myself. I believed then it was time I resumed work and started contributing to our family income. Two of our three children were still living at home in 1985; they were our eldest  twenty-year-old and our youngest twelve-year-old. I make no excuses for not working during the time my children were at school. We’d brought them into the world and I believed it was my job to raise them.

When my husband fell ill, I felt so scared and worried. I didn’t know how long he’d be with me. The doctor said if he didn’t give up smoking he wouldn’t last six months, so his cigarettes were thrown in the bin the moment he came out of the consulting room. Even after giving up smoking, the consultant said if he lived another ten years he’d be lucky. Whatever time he had left, I wanted to spend it with him. Apart from the emotional need to be together at this time, there was also a practical need. I was afraid to leave him alone in case he had another (unconfirmed) heart attack and couldn’t make it to the phone.

He hardly moved off the chair during those first few months and life settled down around my husband’s illness. Gradually, with the determination to start walking our spaniel again, my husband’s stamina and mobility slowly improved. It started with a few steps further each day, building his strength and confidence bit by bit. It took a few years but, eventually, we were able to get out and about again in the car for limited outings. However, he still couldn’t take a step out of the house without a tablet under his tongue to open up his veins.

Over the first seven years of his regular hospital appointments, my husband was never given any treatment other than tablets to lower his blood pressure plus the usual heart attack prevention drugs like aspirin, statins, and glyceryl trinitrate.

One day, he arrived at the hospital for his usual check up, to find another consultant was standing in for his own doctor who was away on holiday. This new consultant was surprised my husband hadn’t had any of the usual procedures. He immediately arranged these tests which confirmed he had suffered a heart attack. Then he referred him to the specialist heart and respiratory hospital for our area. He also discovered my husband has sleep apnoea. This means he regularly stops breathing when sleeping or reclining. Now he wears a mask connected to a Bi-pap machine whenever he lies down.

Once he was under the designated heart hospital he was looked at properly and the doctors said they could give him a by-pass if he lost weight. The specialist surgeon gave my husband six months to lose the weight, and when he returned at the appointed time, two and a half stone lighter, the doctor gave him a thorough pre-op check. Those tests showed my husband had gone past the point of safe surgery. Not only did he now need a four-way by-pass but the carotid artery on the left side of his neck was completely blocked making the operation too risky. The surgeon couldn’t understand why he hadn’t already had a stroke. They are unable to do anything for him unless it’s an emergency situation; otherwise the risks are too great. The fact he also has sleep apnoea adds to the difficulties of an operation.

So there we have it; at seventy-two years old my husband has survived twenty-nine years after his heart attack, so far, against the odds. He puts it down to his own bloody-mindedness. His body has reacted remarkably to his illness. His heart has developed some extra minor veins to cope with the blood flow, and his carotid artery behaves in a way that astounded the specialist who examined it. Apparently, the one good vein flows in both directions like a motorway, when it should only flow in one direction. She told us she’d never seen that before.

As I see it, my husband and I are extremely lucky to now be celebrating our fifty-four years of marriage.  I hope we go on to see our seventy fifth wedding anniversary as my parents did. 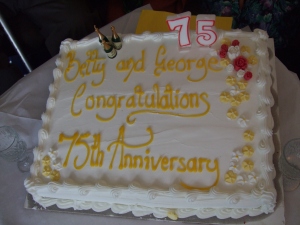 This is why I see it a miracle that we are still together. I thank my lucky stars we found each other so young; he was only eighteen and I was nineteen when we married. He’s not the biggest romantic in the world, but he’s kind, reliable, loving, and he’s mine. I’ll love him forever.

My husband calls me a butterfly because I flit from one hobby to another. Apart from being a wife for 52 years, a mother of three sons, and a grandmother, I'm also an author, genealogist, amateur artist, a lover of most needlecrafts, and occasional poet. Of the above, my most enduring interest has been writing and I hope to be doing it well into old age.
View all posts by caroleparkes →
This entry was posted in #Love, Blog, Life, Uncategorized and tagged #Illness, Anniversary, coping, financial difficulty, happiness, Heart attack, Long marriage, Marriage, miracle, Romance, stroke. Bookmark the permalink.

12 Responses to It’s a Miracle!